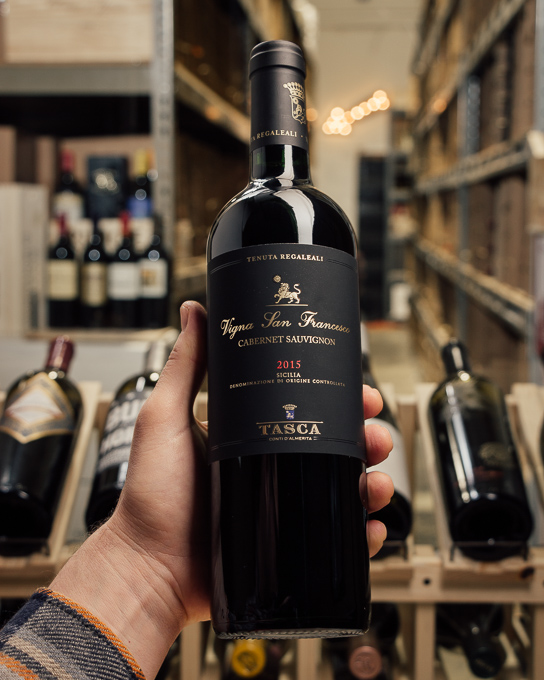 You heard it here first. Tasca’s astounding Cabernet just hit our warehouse -- it is the savviest Cabernet buy on Earth right now (we have the best USA price)! As your consultants and advisors in all things of vinous importance, we must ask you to grab a few of these if you love world-class Cabernet (especially before the rest of the world catches on). $46.95 and FREE SHIPPING on 3!!

Sicily has been a winemaking force since 4000 BC, and certainly has hit the spotlight in the last twenty years or so, thanks to renewed interest (especially by sommeliers) in the incredible wines of this region, and the highly attractive values. Cabernet, though, is a rarity, especially these 35+ year-old vines planted on a south/east facing hillside at 1,800 foot elevation. We were alerted to this under-the-radar producer (for now), and you simply MUST get on board with us. WOW! We are talking rich, intense, concentrated Cabernet flash and power --- as the Wine Advocate noted: “Hats off to this stunning creation...indeed something special...open, immediate and intense.”

Read the full rave reviews below. We have about 20 cases to sell you, and you WILL be one of the few to own it -- expect to be utterly blown away by how much satisfaction you will experience for a shockingly low $47 a bottle. PLEASE do not miss!! First come, first served…!

Eight generations of the Tasca family have farmed and made wine in Sicily making them the premier wine-growing family of Sicily. The Tasca family owns five different estates spanning the many different terroirs of the island. One of the prized possessions of the family is the Regaleali Estate in central Sicily purchased in 1830. It was Lucio Tasca in the 1980s that began experimenting with international varieties like cab and chardonnay that opened the door to world-wide recognition for the winery.

Robert Parker's Wine Advocate
Wow. Here is a seriously beautiful Cabernet Sauvignon from Sicily. Tasca Conti d'Almerita is long celebrated for its Cabernet Sauvignon wines, but this bottle is indeed something special. The 2015 Sicilia Cabernet Sauvignon Tenuta Regaleali Vigna San Francesco (aged in new oak for 18 months) shows plump and exuberant ripeness with dark blackberry and plum. Spice and sweet tobacco come in at the rear. This is a full-bodied red with a richly concentrated and generous disposition. This wine is open, immediate and intense. Hats off to this stunning creation. Some 30,000 bottles were produced. By the way, to avoid confusion, I will point out that this wine was previously known as the Sicilia Contea di Sclafani Cabernet Sauvignon Tenuta Regaleali. The label has now been modified to give more prominence to the single-vineyard, the Vigna San Francesco, where the fruit is sourced. Drink: 2018-2035.

James Suckling
Focused and opulent aromas of black cherries, strawberries, black olives and tobacco leaf to this complex and rich red. Full body, silky tannins and a linear and spicy finish. I like the power and, at the same time, the elegance here. Delicious now, but better in 2020.