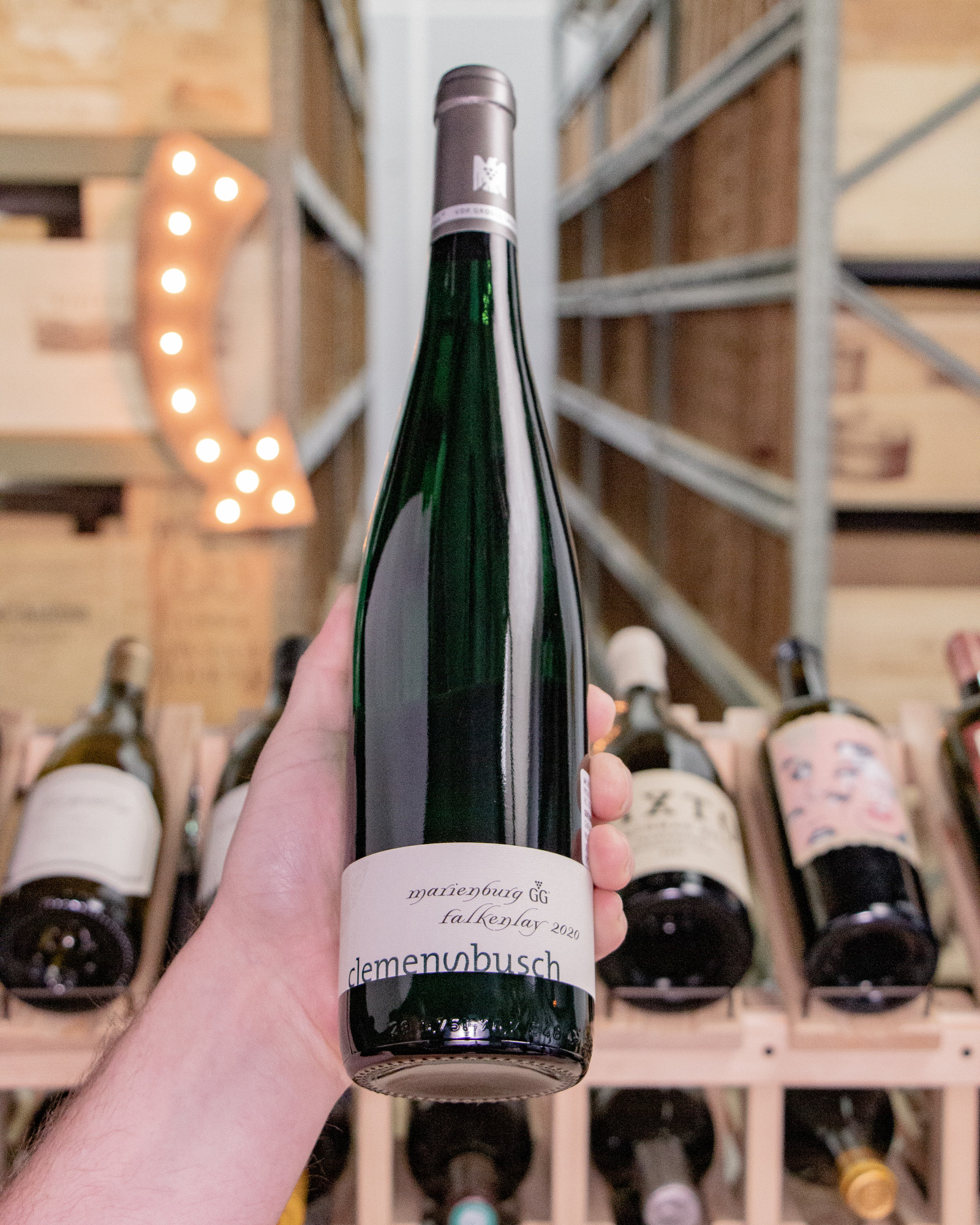 We’re back with another single-site offering from legendary Clemens Busch in the historic Mosel region. Clemens Busch is a modern icon and pioneer of organic, biodynamic, old vine rieslings in the Marienburg. While all their wines receive consistently top scores, this vintage from their Falkenlay site received remarkable DOUBLE 98-point marks. These always fly quickly...with just 10 cases, grab yours without delay!

Just like before, I’ll give you some tasting notes, then encourage you to go load up on the wine before it sells out. But there’s a lot of super-cool goings on at this estate, so you’ll want to come back to read all about it! “Falkenlay” translates to “hawk’s nest” in German – a reference to the local falcons that build their nests in the gaps among the stones that surround this steep, well-protected site. The word is, all the old winemakers in the Pundericher (the neighboring village) agree that this is the best site in the region, known for the creamy and fruity flavors found in this wine.

The wine opens austere and delicate with a decidedly mineral edge and pronounced saline notes. Suddenly, as though the heavens open, angelically pure notes of myriad stone fruits burst from the glass – yellow peaches, white nectarines, and rainier cherries – with complementary notes of rose petals, pomelo zest, and honeysuckle. On the palate, more of the same stone fruit-driven flavors, with fresh herbal notes of lemongrass and tarragon, with a sea spray salinity and chipped rock minerality on the expansive and precise finish. Just impeccable from start to finish.

Now, back to this marvelous estate. The winery was originally built in 1663, across the river from the town of Pünderich, directly on the banks of the Mosel with views over their Marienburg vineyard. Clemens and Rita Busch have built the estate into its current form, alongside their son, Johannes, who has started to work the vines, as well. Clemens is the fifth generation winemaker at this estate (all the previous ones were also named Clemens; he broke the tradition with his son). Clemens started working his father’s 2-hectare estate in 1975 and has spent four decades expanding his holdings to 18 hectares, almost all on the slopes of the Marienburg. Clemens Busch stopped using herbicides in 1976, converting entirely to organic agriculture by 1984. Pioneers amongst the harsh farming and growing conditions in the region, they led the movement to establish an organic grower’s association in 1986, eventually going full biodynamic themselves in 2005. Today, they are members of a number of organic and biodynamic international wine groups, including the “Return to Terroir”, founded by biodynamic guru Nicolas Joly.

The site for this wine is known as Falkenlay, a composition of vines from 65 to 90 years old on an extremely stony and terraced south-facing slope composed of hard, grey slate. The Rieslings that emerge from here consistently demonstrate creamy, lusciously fruit-forward wines, with noble sweet wines also faring quite well on the site. The geology here is based on a volcanic formation hundreds of millions of years old, resulting in a long, undulating cliff face that is the defining characteristic of the Mosel’s steep, rocky vineyards. The three primary slates (blue, red, and grey) are all found here, at different parcels all along the slopes.

In spite of the varied slate profiles and other topography, the German government problematically lumped all these parcels together under one vineyard name, Marienburg, in 1971. Furthermore, they expanded what was a 23-hectare geographically driven site into a 90-hectare politically drawn one, even including a series of flat sites on the opposite side of the river. Clemens has devoted his career to rectifying this mistake, identifying the different terroirs of the original hillside on his labels by their historical names: Fahrlay, Falkenlay, Rothenpfad, Felsterrasse, and Raffes. He further delineates his wines by their soil type, using an ingenious method: the color of the capsule on the bottles indicates the type of slate (blue, gray or red) that dominates the source from which each wine comes. Each vine is tended and harvested by hand, in hazardous conditions of very loose, slick, rock topsoils on very steep slopes. This arduously slow process allows plenty of time to observe the ripening of the berries, and optimal picking, into small baskets, is the result.

Truly one of the world’s great producers, and with this site, in particular, is often the first pick of the critics.

James Suckling
If you thought you knew what peaches smell and taste like, then think again. At first there's a touch of bready character form long sur-lie maturation, but then the most ravishing peach aroma develops, plus notes of wild rose, orange and jasmine. Super-elegant on the ripe yet extremely precise palate. The peachy beauty only expands and expands at the breathtaking finish. From biodynamically grown grapes with Respekt certification. Drink or hold.

Robert Parker's Wine Advocate
The 2020 Marienburg GG Falkenlay opens with a clear, pure and crunchy slate aroma intermingled with generous, ripe and concentrated, very elegant Riesling fruit with herbal aromas. Full-bodied and rich yet refined and saline on the palate, this is a very delicate, pure yet also lush and superbly balanced Falkenlay with lingering salinity, fine tannins and mineral tension. It's very long and almost austere in its merciless terroir character. A great, original Riesling from the Marienburg. 12.5% stated alcohol. Natural cork. Tasted at the domaine in July 2022. 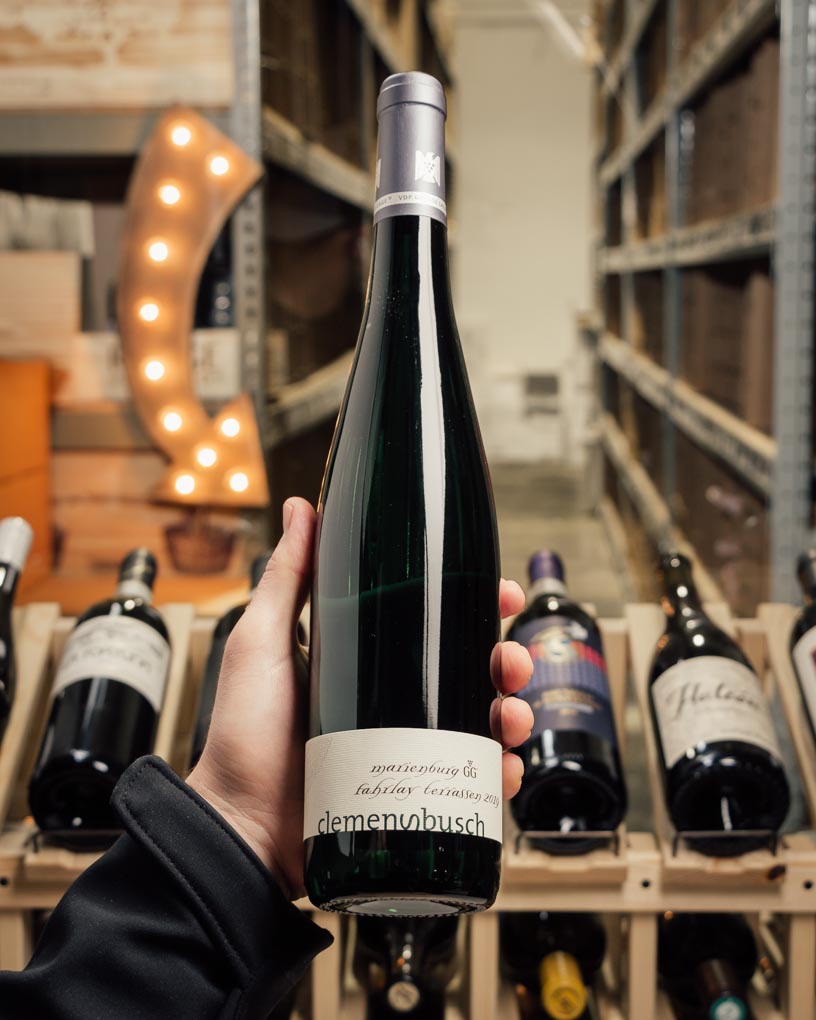 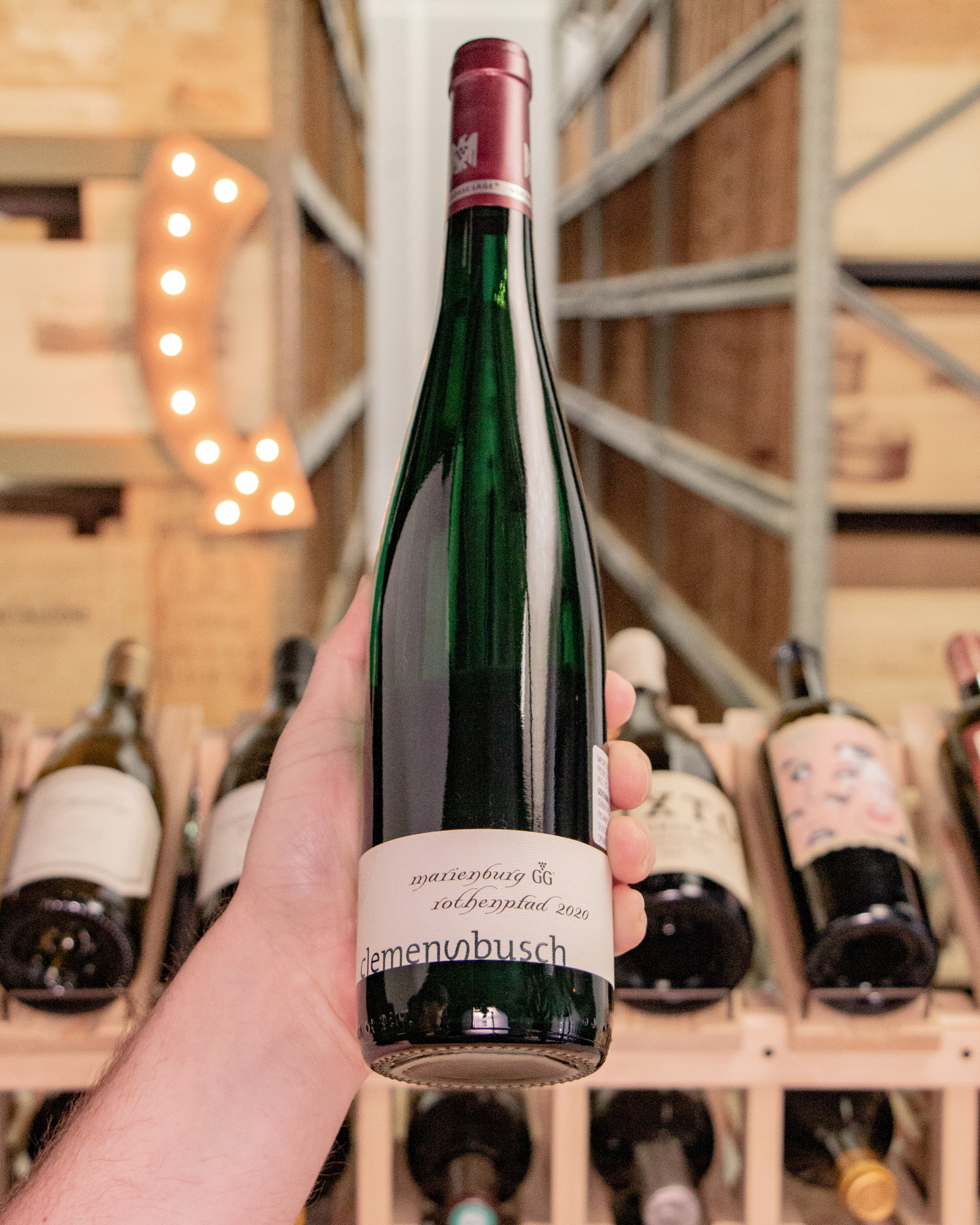 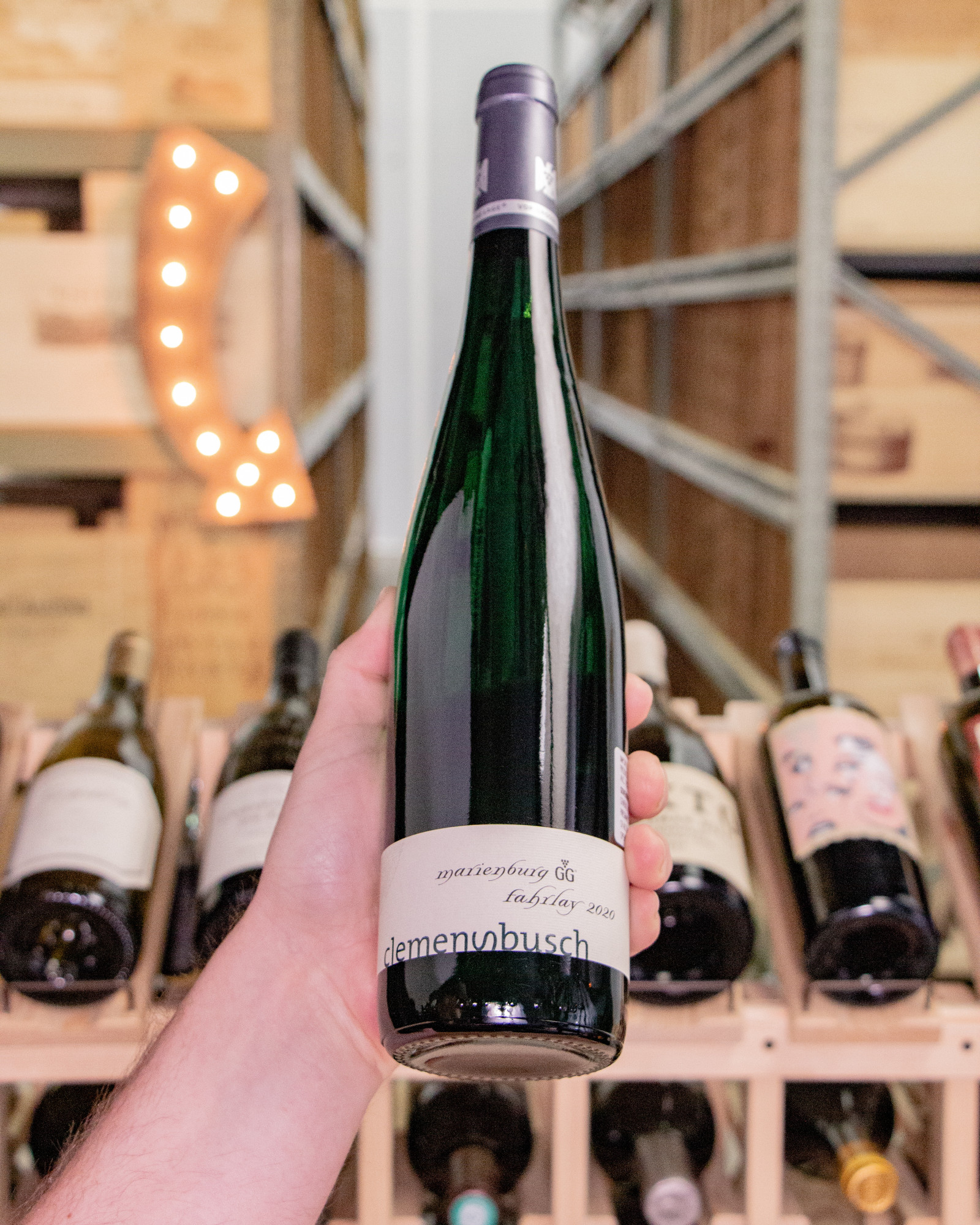 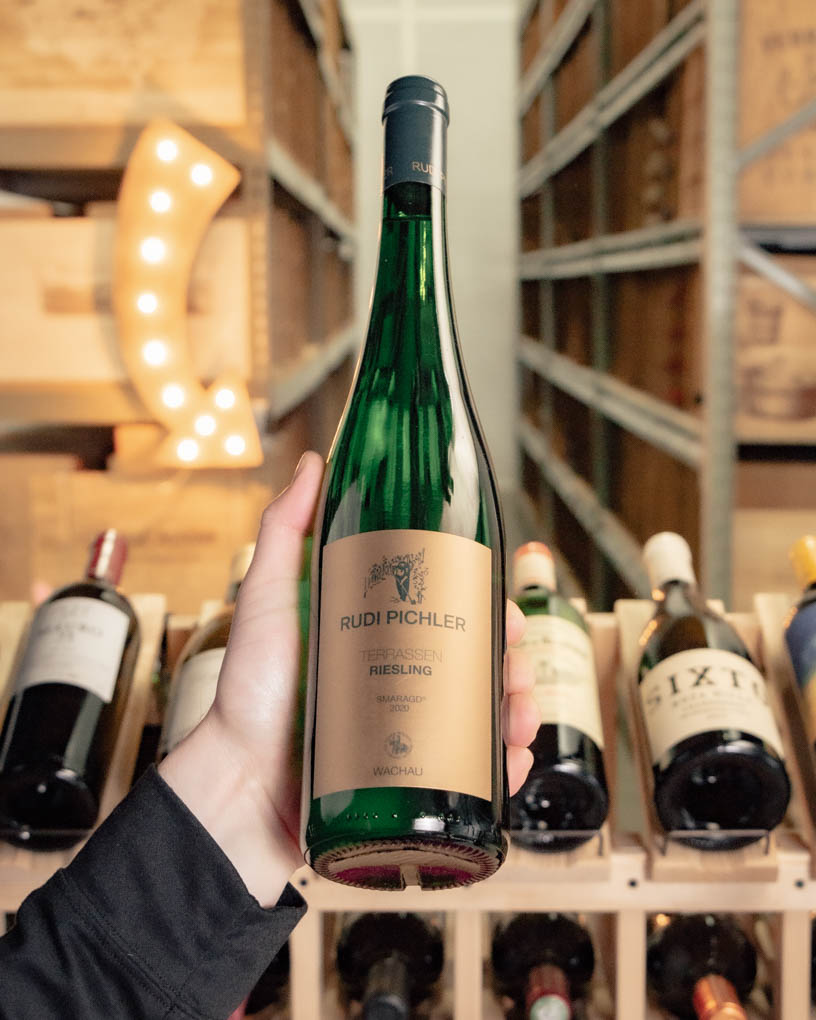 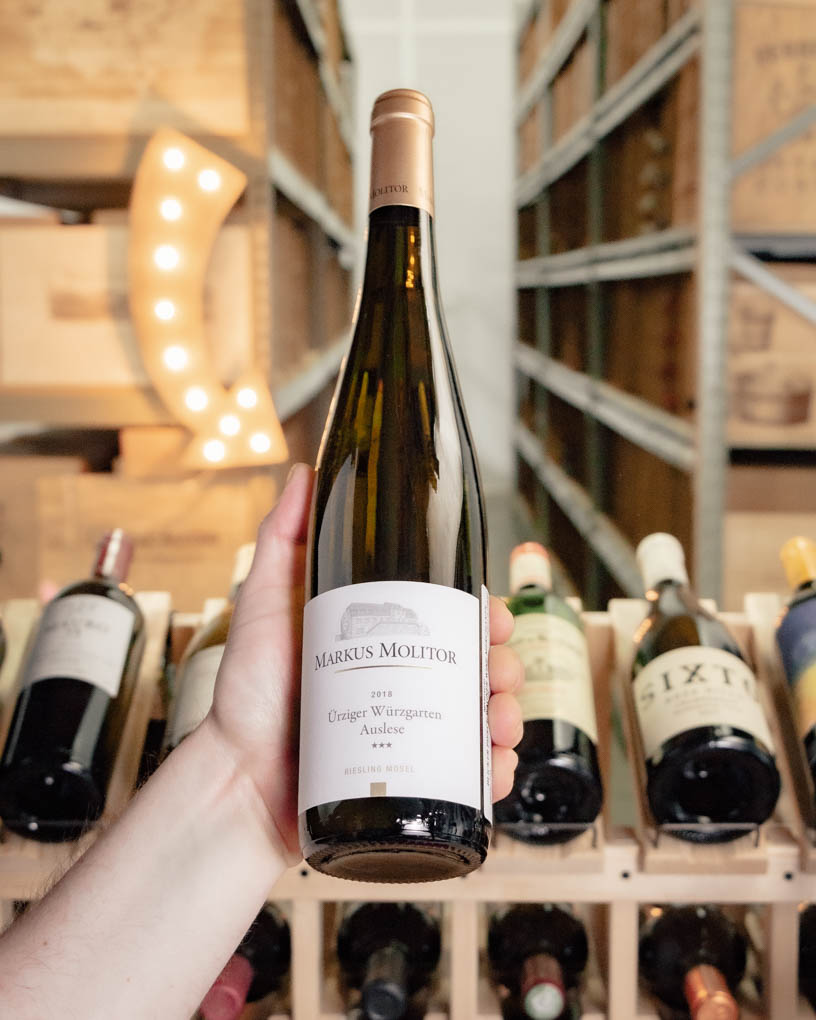